Why Raw Pet Food? Domesticated dogs have been around for some 15,000 years, long before the pet food manufacturers realised there was money to be made by taking the wastes of both the grain and meat industries, in the form of ‘scientifically formulated nutrition’. So how on earth did dogs survive without kibble?! In the wild, a dog will catch it’s food and consume most of it…the flesh (good source of protein), fat (a good source of energy), bone (good source of calcium), organ meats (good source of vitamins and rich in all nutrients), and the stomach (a good source of enzymes, minerals and pre-digested plant material).

It’s a widely contested point, yet dogs, both domesticated and wild, are members of the carnivore family. Anatomically, they are built for it. One of the first pioneers of feeding dogs naturally, Juliette de Bairacli Levy states in her book, The Complete Herbal Book for the Dog A Handbook of Natural Care and Rearing:

“…the dog is a meat eater, from the teeth fashioned for tearing and crushing, the powerful jawbones and muscles, the small, very muscular stomach, the short intestines (to avoid putrefaction of flesh foods), and above all, the very powerful digestive juices peculiar to the carnivorous animals – digestive juices that can dissolve even lumps of bone. In health, the dog’s juices, both of mouth and stomach, are strongly antiseptic, and thus “high” meat and even flesh from diseased animals – food which would kill a human being in a day – can be eaten without harmful effects.”
.

Juliette de Bairacli Levy’s philosophy of raising dogs is called Natural Rearing – raising your dog in such a way as to reproduce the way they would exist in their natural state, as nature intended. A dog raised naturally, is better able to defend against disease because it’s body is functioning correctly, on the food it was designed to eat.

Natural rearing diets, such as NR (Natural Rearing) or Prey-Model, Species Appropriate, or BARF (Biologically Appropriate Raw Food, also known as, Bones And Raw Food), are based on fresh foods such as raw meats, raw bones, and optionally raw vegetables and herbs. 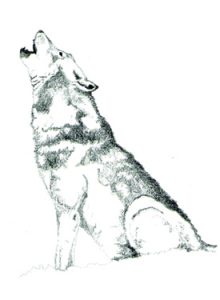 Cooking breaks down many of the proteins and amino acids in raw meat, thus destroying much of its nutritional value. The canine being a hunter, and also a scavenger, will be able to exist on a diet of cooked food, yet it will not be in optimal health, not dissimilar to a human being on a diet of only McDonalds burgers and fries for their entire life.

Raising your dog on poor diets will eventually take its toll – disease, rotten teeth, immune deficiencies, short life span, high vet bills, the list is endless. You can run a car on low-grade engine oil, yet eventually, the engine will deteriorate and break down much faster than an engine run on the correct oil, and feeding both ourselves and our dogs is no different.

Thanks to the works of Juliette de Bairacli Levy and many who have come after her, Species Appropriate Raw Food is becoming increasingly popular with concerned dog owners, and a whole industry of raw food supply has flourished to meet this new demand – bringing fresh raw whole food to you, in a simple, affordable package, for optimal health of your dog, just as Mother Nature intended – naturally.

Benefits of a Raw Diet:

For more details on the full benefits of a raw, please see our sister site here